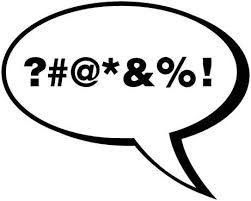 I admit… with some shame… that I have used the C word.  On more than one occasion.  Generally, when the F word is not enough.  And always, but always, when I am driving.  I think it’s because I cannot be heard.  I’m safe, behind the steering wheel, and encased in glass and metal, with the sound of the roaring engine, and the radio on, at 70 (go on then, 80mph) in the middle lane, whilst quickly approaching some silly person doing 60 and NOT PASSING ANYONE.  Why oh why oh why are those dumb, crazy peopleallowed on the road?  Did they not pass the same test as the rest of us when you are quite clearly encouraged to try to keep to the left if not overtaking?  Can’t they remember?  Or are they just plain boringly ignorant?  It’s beyond me.  Anyway… what I mean is, surely it’s safe to use the profanity when no one can hear me – it would be bloody awful if they did.  And I don’t mean to offend.
Of course I am not rude or vulgar in other public situations.  I’m a perfectly normal well behaved adult.  Well at least I try to be.  And don’t think I wouldn’t be shocked if someone swore right at me.  I don’t often find the need to swear if I’m just out and about – shopping, dog-walking or in a restaurant…  I don’t look at the menu and say to the waiter, ‘I think I’ll try some that fuc*ing amazing looking steak’.   But, in other situations, among friends, I might say, “cor, that steak was bloody good”, and no-one would take offence (would they?).   So I, among many others (most of us apparently), will use swearing as an intensifier, to beef up a sentence that just otherwise would not get the point across. See tame first paragraph above. When our emotions are high, something has to give.
So, after my angry tirade this morning to multiple halfwits on my daily M25 jaunt, I got to thinking about some of these words and looked into them on my return home.  Here are some interesting facts that I came up with:
–        The word ‘fuck’ has been in use since approximately the late 15th century.  Apparently, it was used as an acronym for Fornication Under Consent of King which was displayed on doors of couples who had the King’s permission to have sex.
–        Swearing can actually lead to a surge of adrenaline and a reciprocal anodyne effect (good for when you stub your toe.)
–        A recent panel considered ‘c*nt’ to be the most severe profanity, with ‘motherf**ker’ the second, closely followed by ‘fu*k’.
–        Children often pick-up and use a four-letter word before they learn the alphabet.
–        About 0.5% of the words an average person speaks are profanities.
–        Men swear more than women, but less in women’s company.
–        Women however, don’t give a f*ck and swear more in men’s company.
–        ‘Rooster’ and ‘donkey’ were created when the words ‘Cock’ and ‘Ass’ began being used in a bad way during the 18th century.
–        When Charles Dickens wrote A Christmas Carol, Scrooge’s favourite phrase “Bah Humbug” was the equivalent of saying “Bullshit” today.
–        Schiteburne Lane—now Sherbourn Lane near Monument in London—means “shit-stream lane.”
Now… Am I brave enough to publish this in my Blog?