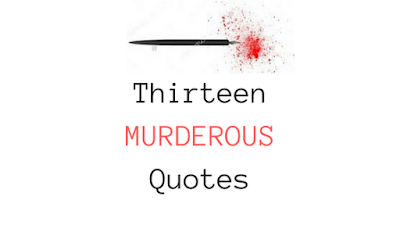 “It is forbidden to kill; therefore all murderers are punished unless they kill in large numbers and to the sound of trumpets.”

― Voltaire
“I want to commit the murder I was imprisoned for.”
― J.K. Rowling, Harry Potter and the Prisoner of Azkaban
“How to Commit the Perfect Murder” was an old game in heaven. I always chose the icicle: the weapon melts away.”
― Alice Sebold, The Lovely Bones
“If you’re that obsessed with someone, why would you kill her?
Humans are full of contradictions.”
― Ai Yazawa
“I shot a man in Reno just to watch him die.”
― Johnny Cash, The Very Best of Johnny Cash
“I am thinking,’ he remarked quietly, ’whether I shall add to the disorder in this room, by scattering your brains about the fireplace.”
― Wilkie Collins, The Woman in White
“You wanted to kill your father in order to be your father yourself. Now you are your father, but a dead father.”
― Sigmund Freud
“What I feel is that if one has got to have a murder actually happening in one’s house, one might as well enjoy it, if you know what I mean.”
― Agatha Christie, The Body in the Library
“You should have died when I killed you.”
― John le Carré
“All the motives for murder are covered by four Ls: Love, Lust, Lucre and Loathing.”
― P.D. James, The Murder Room
“One situation – maybe one alone – could drive me to murder: family life, togetherness.”
― Patricia Highsmith
Seeing a murder on television can … help work off one’s antagonisms. And if you haven’t any antagonisms, the commercials will give you some.
― Alfred Hitchcock
In Italy, for thirty years under the Borgias, they had warfare, terror, murder and bloodshed – they produced Michelangelo, Leonardo Da Vinci and the Renaissance. In Switzerland, they had brotherly love and five hundred years of democracy and peace, and what did they produce? The cuckoo clock!
― Orson Welles, as the character Harry Lime in the Graham Greene film, The Third Man (1949).