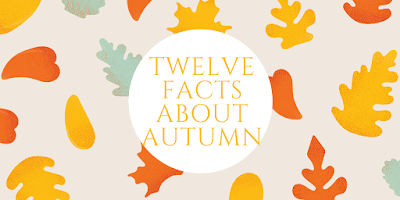 So we’re all set for all things russet, red and orange.  Pumpkins, cobwebs, falling leaves, Halloween, a harvest moon (the full moon closest to the autumn equinox), snappy twigs, chilly-crisp mornings, electric blankets, deep hot baths and roaring fires.
In honour of the season, I found some interesting facts to share with you.

1.      The autumn equinox always happens on 22ndor 23rd September and marks the beginning of the season, but to record data more effectively, the Met office set dates that can easily be compared, so declare it on 1 September.

2.      The word ‘equinox’ is from the Latin meaning ‘equal night’ and describes the period when the sun shines directly on the equator and means day-time is equal in hours to the length of night-time.  There are 2 equinoxes every year – in September and March.

3.      Our calendar (the Gregorian calendar) is not perfectly symmetrical with the orbit of the earth though, and therefore, in 1931 autumn equinox fell on 24th September.  The next time this happens will be 2303.

4.      Some scientists say that our testosterone levels (men and women) are highest during autumn because of ancient human mating instincts.

5.      All Hallows Eve (or Halloween) was a pagan holiday honouring the dead and is the last day of the Celtic calendar.

6.      Keats called autumn the ‘Season of mists and mellow fruitfulness’.

7.   Tree leaves change colour because there is not enough light in the shorter days for photosynthesis to occur and therefore the amount of chlorophyll is reduced.

8.      The Journal of Aging Research found that babies born during the autumn months are more likely to be centenarians than those born at any other time.

9.     These days the word ‘fall’ is commonly used more in America to describe the third season, but it was in widespread use in England during the 17th century and is a shortening of the phrase ‘fall of the leaf’.  ‘Autumn’ begun to be used in the 18th century and is from the French word ‘autompne’. This in turn came from the Latin ‘autumnus’.

11.   Winter, spring and summer all feature in film titles that have won Oscars, but no film with autumn in its title has ever won one.

12.   Some research shows that women lose more hair in autumn.